Know your mobile security score with the NowSecure Protect app

Update: As of January 3, 2017, we are no longer supporting the NowSecure Protect app. We remain committed to improving enterprise mobile security by focusing on the most cutting-edge mobile app security testing and endpoint risk solutions.

Sometimes our indulgence in the convenience of mobile phones and tablets can distract us from the incredible amount of sensitive data these devices contain, touch, and generate. To give you a clear view of the privacy and security status of the data on your mobile device, we built the free NowSecure Protect mobile security app – rated by US News & World Report as one of the top five “Apps to Keep Your Cellphone Safe From Security Threats.” The app, available on both Android and iOS, gives you an easy-to-understand mobile security score and tells you how to make your device more secure. The real-time mobile security score calculated by NowSecure Protect is based on an assessment of your device across three risk domains: 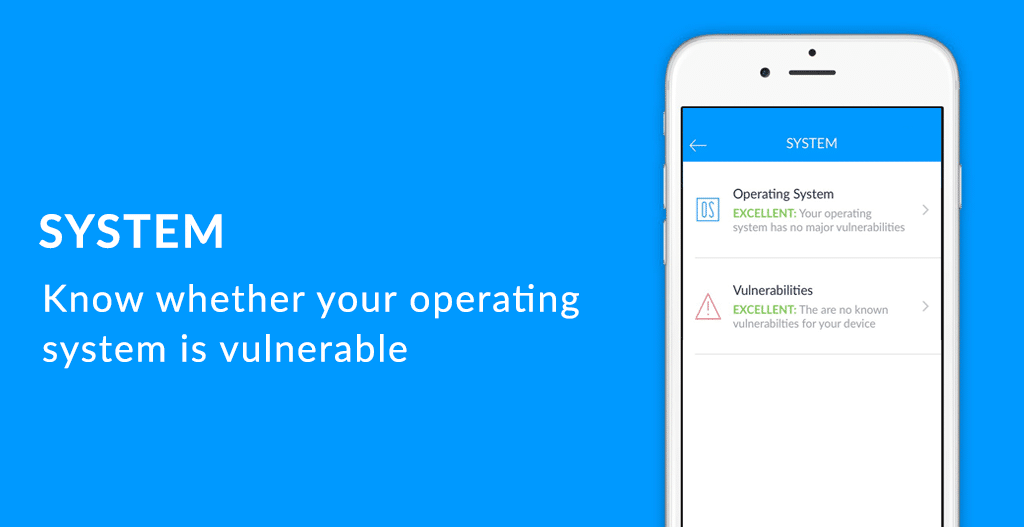 Because a number of exploits take advantage of flaws in mobile operating systems (OSs), NowSecure Protect checks whether your device is running the most current version of Android or iOS. Generally, an outdated OS is less secure and upgrading will increase your security score. However, the large number of different Android devices in use and the complexities of receiving updates for those devices can cause a low security score for even updated Android devices (see “Not all aspects of your score are in your control” below). Don’t be fooled though. This does not mean iOS is any more secure or less vulnerable than Android. Many times iOS vulnerabilities are not announced publicly until a new version of the OS that fixes those flaws is available. Your device’s settings have a significant effect on your mobile security score. For example, the app will check whether you’ve enabled a passcode on your device because it prevents someone who finds, or steals, your device from accessing your device and data. The app also examines whether your device is jailbroken or has “root” access. “Jailbreaking” or “rooting” a mobile device means bypassing settings within the OS that restrict access to sensitive data and files on the device. Put simply, if a device is jailbroken, it’s easier for an attacker to access data on that device. Finally within the configuration domain, NowSecure Protect will report on the security of the Wi-Fi access point to which your device is connected. Insecure Wi-Fi connections do not encrypt data in transit, allowing a motivated individual to view it. Not only will the amount of data handled by your device potentially surprise you, so might the locations and organizations to which your data is sent. NowSecure Protect analyzes network communications to tell you where your data is sent and whether it’s encrypted.

The app gathers information across these three domains and then assigns each finding a severity based on the Common Vulnerability Scoring System (CVSS). From there, the app inputs domain score data into an algorithm that adds more weight to certain findings based on their security impact, and then calculates the mobile security score reported on your screen.

Not all aspects of your score are in your control

Some Android users will find that their OS causes a low security score even if they’ve upgraded to the latest version available to them. Due to the large variety of devices and Android versions in use, upgrading to the latest OS for your phone or tablet doesn’t mean that it’s secure or doesn’t contain known vulnerabilities.

Phone and tablet manufacturers have created and sold a large number of devices, and they don’t support all of them with OS updates. If they do, it can take them many months to release security updates. This results in rampant use of outdated and known-to-be-insecure versions of Android.

You don’t have control over all aspects of your mobile device’s security, and you may find yourself disappointed in a low security score. Although it’s little comfort, you’re also not alone. NowSecure Protect gives many Android users a low security score due to their OS, and there’s nothing anybody other than Google, device manufacturers, and wireless carriers can do about it.

The good news is NowSecure Protect app will help you correct the security issues you can control, making your device that much more secure. The app will also make you aware of vulnerabilities in your OS even if you can’t do anything about them, the philosophy being it’s better to be informed than ignorant.

If you haven’t already, download NowSecure Protect for Android or iOS today: